For the period 2006-2010, 90% of fatalities, excluding pedestrian and cyclist related, were the result of vehicles crossing onto the wrong side of the road and running off the road or hitting an oncoming vehicle. To reduce the risk of this type of crash, the Department of Planning, Transport and Infrastructure (DIT) is installing new centreline treatments along the full length of Highway between Tailem Bend and the South Australian/Victorian Border aimed at addressing fatigue and inattention related crashes. The strategy includes the introduction of a new style of centreline marking, initially at identified high cross centreline crash risk locations.

Stage 1 of the project consists of the installation of new wide centrelines, covering up to 39 kilometres of the Dukes Highway as indicated below:

Stage 2 of the project consists of the installation of up to an additional 52km of wide centrelines between Yumali & Culbarra and also Tintinara & Bordertown. 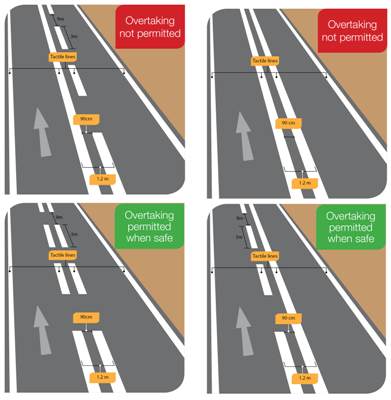 What will the new wide centreline treatment look and feel like?

What are the benefits of the treatment?

Will overtaking be permitted?

When will this happen?

Example of how the wide centreline treatment will look where overtaking is permitted.